We hear that at the end of Mass, “Go forth, the Mass has ended”. Mass had ended but our call to be evangelizers is renewed. We are hearing much about evangelization today. But this word can mean many things to many people. Is it that we are called to convert everyone to Catholicism? If so, maybe we should be exhorted to “Go Convert”! Is it to preach the Gospel? Well, no one likes to hear preaching! Perhaps St. Francis de Sales, whose feast we celebrated on January 24, said it best, “Live Jesus”!

I believe we are called to “Live Jesus”! It is through loving, giving, helping and sharing in the ups and downs of others’ lives that we are evangelizing. It is through our actions that reflect the love we have found in Jesus and that unconditional love we feel from our Lord that enables others to see the possibilities of this love in their own lives.

We need to discuss what evangelization means. Many think it is solely about converting others to the “Catholic” way of thinking. That can happen and is wondrous if it does. I want to propose that our lives are testament to the love of Jesus, to the love we have for our faith. Those who are searching may join us. But there are many who believe in a loving God, the “golden rule” of loving your neighbors as you love yourself. We are one family regardless of what we believe. We cannot “pigeonhole” God or have God taking sides to make us right. What is right is the way we live each and every day!

Pope Francis has written an apostolic exhortation, “Evangelii Gaudium” (The Joy of the Gospel). Let us take the time to read this and then have a real discussion on evangelization. The reopening of St. Joachim depends on this. Our souls depend on this.

Lastly, the Pope has recently said that all Christians must find a way to achieve unity and you can further read his thoughts here.

Today, on the Feast of the Baptism of Our Lord, the Pope announced the newest Cardinals that he will install on February 22, 2014. You can read about it here, “The Scarlet is Served – Pope Reveals 19 New Cardinals”. If you have been “cardinal watching”, you know that it was speculated that there would be no new American cardinals. Our own Archbishop Chaput and Archbishop Jose Gomez of Los Angeles were thought to be under consideration. However, their predecessors, Cardinal Rigali and Cardinal Mahony, respectively, were still under the age of 80 and it is unusual to have 2 Cardinals within the same diocese.

Now, I must be honest. I have said this before but it bears repeating. I recognized the difficult job Archbishop Chaput undertook when coming to Philadelphia. I watched his intial welcoming to the city, his installation and felt strongly that he was doing the best job he could do, so I supported him and his efforts. I was genuinely sorry the Archbishop wasn’t a Cardinal so that he could participate in choosing our next Pope after Pope Benedict XVI retired. However, his Area Pastoral Planning Process failed the faithful people of Frankford, who last year had two churches, St. Joachim and Mater Dolorosa, and today, have none. Reaching out to the Archbishop directly, and those representing him, we were told there would be no meeting, no consideration, as we repeatedly heard, “the decision has been made and we are not considering any changes.”

Well, we can take heart in Pope Francis’s words to us, “Dear Lay Faithful, be close to your priests with affection and with your prayers, that they may always be shepherds according to God’s heart.” We believe strongly that we must, each of us, take charge of our faith and be living witnesses to all we meet and to expect that we share in the priesthood of our clergy as well through our Baptism. (Today is, after all, the Baptism of our Lord that we celebrate.) That is our call to continue to reach out to all with the “Good News”, the joy of being Catholic. 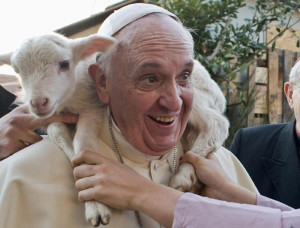 As for our dear Archbishop Chaput, perhaps his heart could be more open to the Pope’s call as captured in his words on Holy Thursday at the Chrism Mass,

“Those who do not go out of themselves, instead of being mediators, gradually become intermediaries, managers. We know the difference: the intermediary, the manager, “has already received his reward”, and since he doesn’t put his own skin and his own heart on the line, he never hears a warm, heartfelt word of thanks. This is precisely the reason why some priests grow dissatisfied, become sad priests, lose heart and become in some sense collectors of antiques or novelties – instead of being shepherds living with “the smell of the sheep”, shepherds in the midst of their flock, fishers of men.”  (Refer to link in post to read the entire message.)

We have heard the Archbishop refer to himself as a manager. We have tried to thank the Archbishop. Even after he told me, at one of his Sunday night Masses, (and I was being pushed along by his security) that this was not the time or place to discuss such matters, (yet he would not make or give us any time or place to discuss such matters), I, instinctively turned around and said, “We love you, Archbishop”. I later wrote to him asking if he heard me.

The Archbishop is a good man, a holy man but we need to find another way besides closing churches, selling nursing homes and leasing cemetery grounds to balance our budget and reach our objectives. The very people that would help you, Archbishop, are the very people you are shutting out and turning away.

Isn’t that what all people want – just to be heard? So we continue. St. Joachim’s appeal was turned down by the Congregation of the Clergy. The ruling was that the Archishop did not do anything canonically wrong – he didn’t break canon law – but it was still not a right and just decision. Just this weekend, we filed an appeal with the Apostolic Signatura, the Vatican Supreme Court. I believe we will be heard. I believe we will continue to do all within our power to reopen St. Joachim Church to continue the work of our ancestors in a community that wants to be heard and wants the healing that only our Lord Jesus Christ can provide.

Thank you for reading and God bless you!